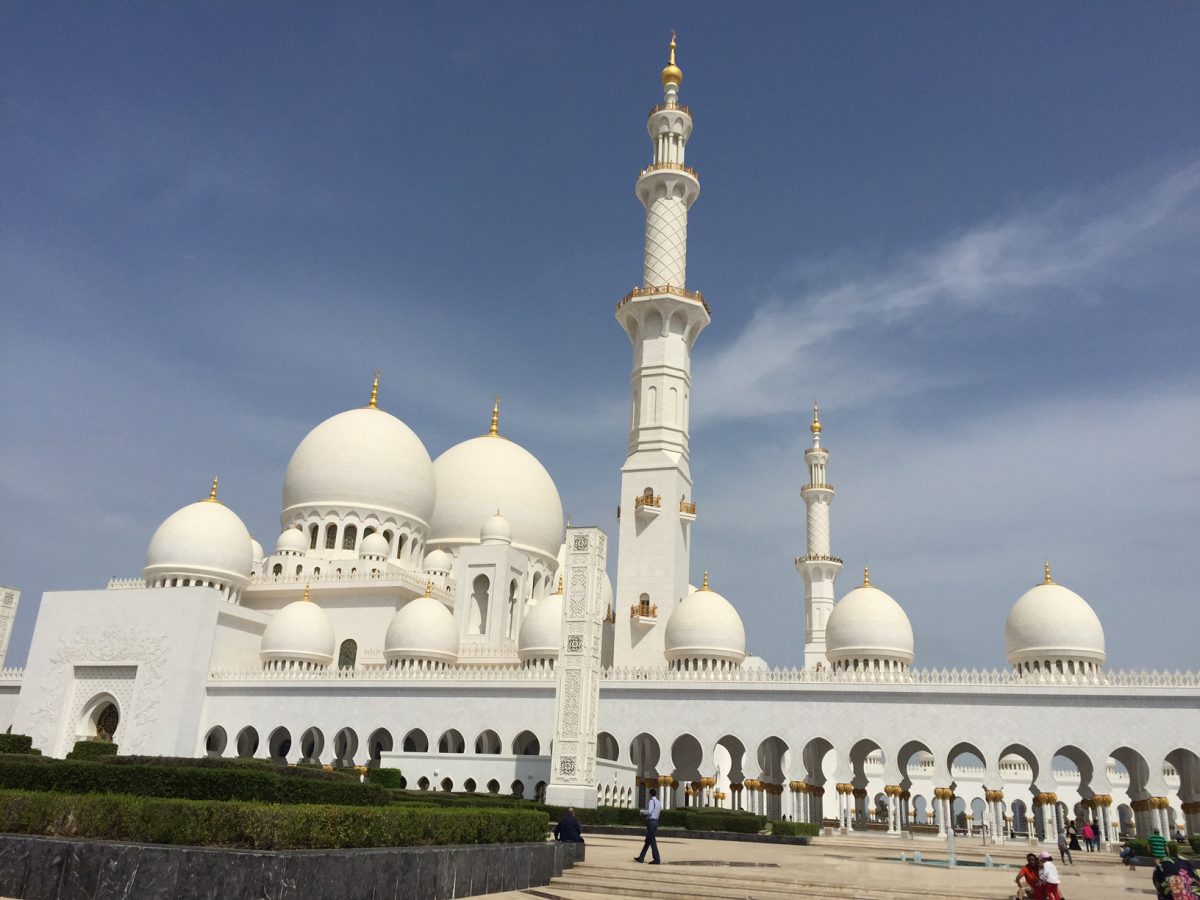 To visit the Sheikh Zayed Grand Mosque Center is a cultural experience of peace and tranquillity – where art and architecture meets religion.

I had heard from colleagues and friends that a visit to the Grand Mosque was a must see in Abu Dhabi.  As I am a true architecture lover – I made this a priority on my first visit to Abu Dhabi.  The architecture has been described as a fusion of Arab, Persian, Mughal, and Moorish.

Indeed, also my cultural curiosity was piqued as to the high level of accolades I heard about this magnificent structure. And so it was with great respect and awe that I visited the Sheikh Zayed Grand Mosque Center on my journey to Abu Dhabi, the capital of the United Arab Emirates.

This masjid or mosque is a national icon introduced by the late President of the United Arab Emirates (UAE), HH Sheikh Zayed bin Sultan Al Nahyan, and his final resting place is located on the grounds. He passed away in 2004.

Construction began in 1996, and the internal prayer halls were initially opened for worship 2007.

The Sheikh Zayed Grand Mosque appears over the horizon in all its white splendor presenting the domes and minarets.  There are 82 different shapes and sizes. It is the pure white colour of the structures that give it such a distinctive feature.

And believe it or not – odd as it sounds – I could see this building from my hotel room.  As I luxuriate in my room – I have a clear view of the magnificent white buildings.

YES, I WAS FEELING A LITTLE BIT LIKE A PRINCESS.

I now know that this view was not some coincidence. Based on his vision, Sheikh Zayed had the mosque built with the rise of 11 metres above sea level, and 9.5 metres above the street level so that it is clearly visible from all directions.

The day of my visit, I made my way to the masjid for the late morning time. Do make sure to take a guided tour, just as I had.  You will hear many particulars that point out the meaning and the history of the mosque and the intricacies of the interior.

The Mosque is open to everyone from all walks of life – Muslim and non-Muslim. There is a dress code for both men and women – and a behavior code.  It is a simple mandate from the administration.  The rules are really not such a big interruption from a person’s life. In my opinion – be respectful of other customs and cultures and a world of discovery awaits you.

What a feast for the eyes – gorgeous white marble mosaics with exquisite floral designs. The courtyard in view is considered the largest example of marble mosaic in the world. Size does not detract from its regal spiritual serene luxurious feeling.

My eyes delighted in observing the many natural materials used in the design and creation.  I loved seeing the gold, marble, semi-precious stones, crystals, and ceramics.

The Sheikh Zayed Grand Mosque used artisans and materials from all over the world – from India, Pakistan, Malaysia, Turkey, China, Italy, Morocco, Macedonia, Germany, Iran, United Kingdom, New Zealand, and United Arab Emirates. More than 3,000 workers and 38 companies worked on the construction of the mosque.

I was told there was a library inside – so I was intrigued to see what it would be like. Off I went and discovered a calm polite gentleman tending this place of learning and education.

The library exists for the community with classic books and publications addressing a range of Islamic subjects: sciences, civilization, calligraphy, the arts, with some rare publications dating back more than 200 years. All I could think was that this library visit will need to be extended more into my next visit there. 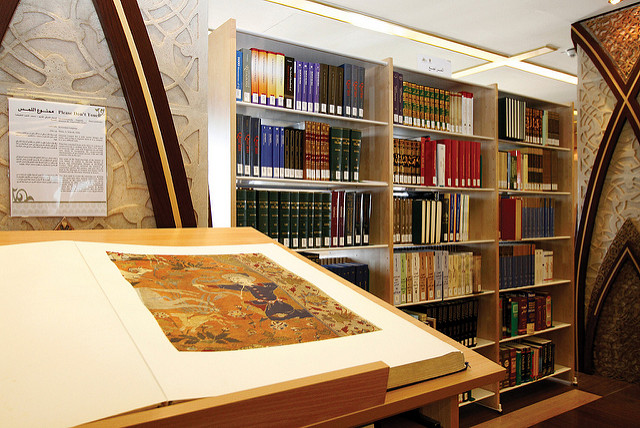 As I understand, the Sheikh Zayed Grand Mosque takes on another transcendent image at night.  This is due to the unique lighting system created with 22 towers and light projectors to reflect the phases of the moon. Unbelievable.

My daytime visit was the best starting point to absorb the magnificence and beauty of the Sheikh Zayed Grand Mosque. 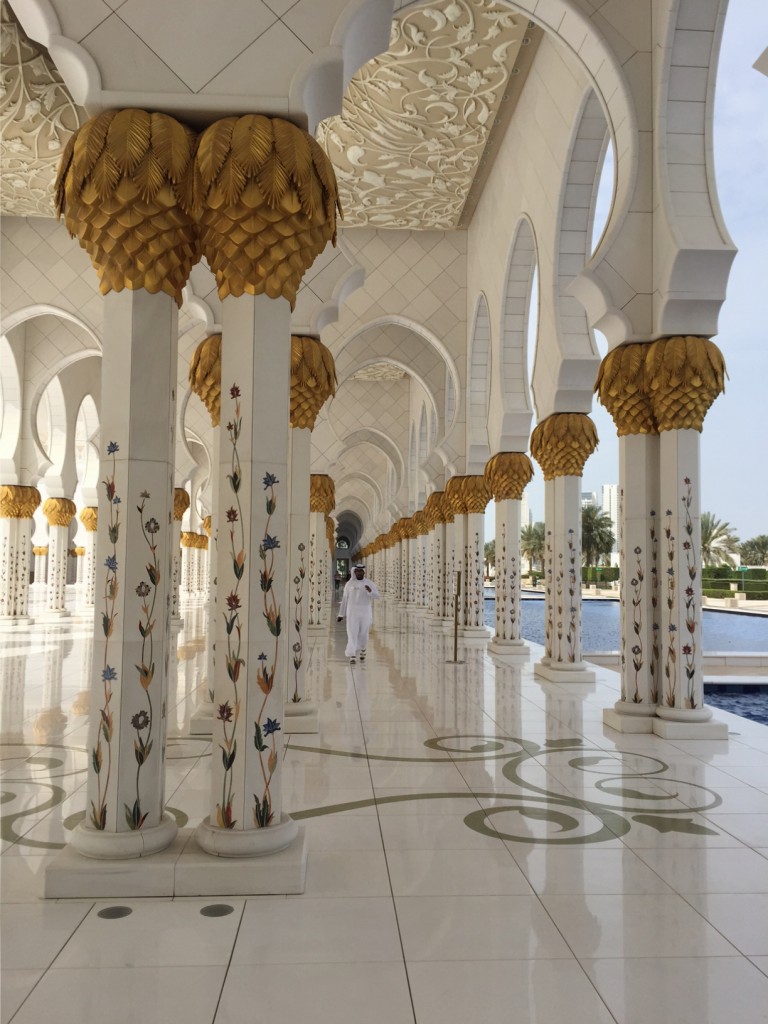 Feel the breeze blow through the columns.

Watch the people who come for prayer.

An absolutely stunning event of peace and spirituality.